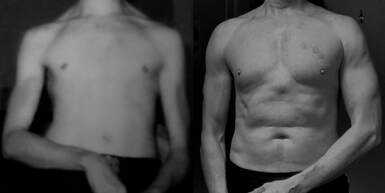 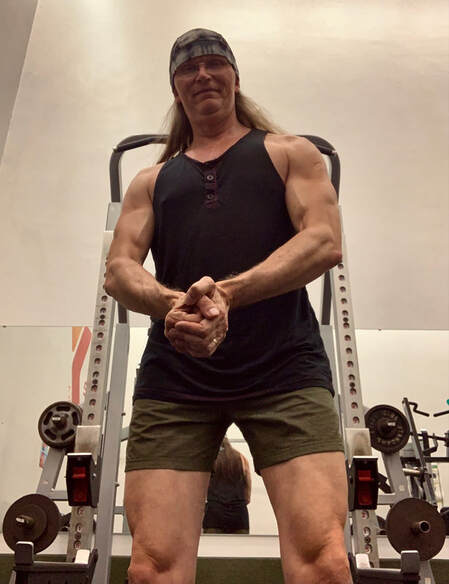 Outside of the weight room John is a Grammy® nominated recording artist. It's true! Here's his artist website! But throughout the years his other passion has been bodybuilding. John has always loved pumping iron, and lifting those dumbbells and barbells has given him so much. Here's why....

John Two-Hawks' journey from abusive, forced undernourishment to successful lifestyle bodybuilder and personal trainer has been long and winding.  When John walked into that fitness center for the very first time and signed up for a membership, he was 6 foot 3 inches tall, and weighed just under 125 pounds (see photo at the top of this page - that's John at age 18 on the left).  Severely malnourished and emaciated; John was the literal definition of skin and bones. That health club and all that weightlifting equipment was intimidating at the start. Not to mention all those people with muscles and great physiques. John looked around for anyone remotely resembling him and found no one. He really felt like a fish out of water. And he said it felt almost delusional to think that he could ever be as fit or muscular as any of those folks. That all changed when a serious bodybuilder named Dan struck up a conversation with John at the club one day and took him under his wing. Thus began John's immersion into the world of resistance training.

What John could not have known at that time was how much building muscle onto his emaciated frame would heal his broken soul. With every inch and every pound he gained, years of deep trauma was repaired. The increased strength John added to his body translated to more and more inner restoration, resolve and self confidence. In short, lifting weights and gaining muscle not only increased John's physical strength, but played a major role in healing the mental, emotional and spiritual trauma he had suffered as well. Thus began his journey into the world of bodybuilding and resistance training as a means to grow muscle, and shred the wounds of abuse one rep at a time. John's unique experience with resistance training as a vehicle for healing is what birthed his 'Think & Grow Strong' approach.
Now let John help you do the same!

This is the reason John created Lifting for Healing; to pay it forward and share what he knows, helping others to heal, achieve total wellness and 'Think & Grow Strong'! Let’s get you connected with John!
CLICK HERE to see John's powerful book 'Hidden Medicine - Surviving, Healing and Rising From The Ashes of Abuse'